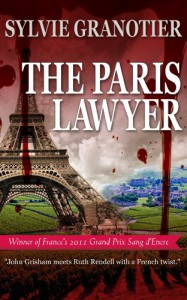 The Paris Lawyer is the story of Catherine, a young and rising lawyer who is taking on her first murder trial.  She's been in the courtroom a number of times but this is the most important case of her career.  An undocumented Gabonese woman married a older French farmer and when he died of arsenic poisoning, the wife is the first suspect.

Catherine has a huge mystery in her own life because her mother was murdered when Catherine was a baby and the murderer has never been found.  This was obviously  the most influential event in Catherine's life and has driven much of how she has grown up.  Her father has consistently refused to talk about her mother and what happened so it has remained a deep dark mystery.

What made this book a bit difficult for me was that so much of it is taken up with what is going on in Catherine's head. I don't mind a psychological mystery but I do need something to happen in the book. I kept wanting to say, "Get on with it!"  There is little action until the very end and by that time I knew who the murderer was. I do think there are readers who will love this book and it was very well written.  It was just written for a slightly different audience than me.

The Paris Lawyer is a French mystery translated into English. It is an award winner in France and I can say that it is obvious that it is a French mystery written by a French author for a French audience. I love almost anything French.  I am a confirmed francophile.  But this book had a bit too much of a foreign feel for me as an American reader to thoroughly be comfortable with it.

I received this book from Netgalley.