Her Royal Spyness by #RhysBowen 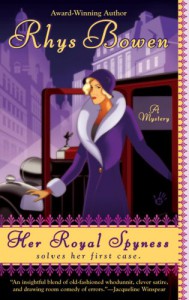 I'd call this an updated version of a British cozy.  It's fun, it's light, it's easy to read and the characters are very likeable.  The heroine is a minor British royal who's incredibly long name has been shortened to Georgie.  She's 34th in line to the throne and impoverished. She needs to make her own way in the world with just her name, family connections and knowledge of how to behave in social situations. When a dead body turns up in the bathtub of her family's London home, she has to prove that neither she or her brother are the murderer.

This book is full of the type of zany British aristocrats we Americans love to read about. The mystery isn't that hard to figure out but that's ok.  This book is meant to be fun, not taxing.  Rhys Bowen knows how to write a book that mystery readers want to read.  I'll be looking for #2 in this series right away.

I was given this book to read through Netgalley.