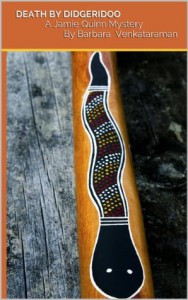 I was given this audiobook for review by the author and I quite liked the story.  I did not like the narrator and would probably not listen to anything read by this particular person again but I did like the story.

The plot revolves around the death of a former rock star who is found murdered in his music store.  Standing over him, holding the murder weapon which happens to be a didgeridoo, is a young student of his who happens to be autistic.  The heroine of the story, Jamie Quinn, is the cousin of the student and a lawyer.  She's not been practicing for a while due to the death of her mother but she's willing to do anything she can to protect her cousin.  This involves going into the victim's past and dealing with ex-band members, fans, and associates.  She's not a criminal lawyer so she also has to get plenty of advice from her friend who is. Cozy mysteries tend to have a quirky character and in this case it was Duke, a private investigator that comes off just a little too weird for me.  It could have been the weird voice the narrator was using for Duke but I could have done without him.  The mystery isn't terribly difficult but this is the debut of a series and not very long so that's not surprising.  It's a pleasant read and I would enjoy learning more about Jamie in future books.

mystery 1st in a series Whodunit