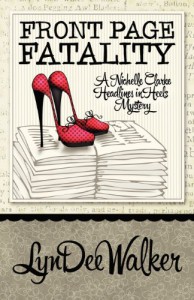 I am usually scrupulous about reading a series in order.  In fact, my sister and I have had this discussion several times because she is willing to run willy-nilly through a series in any way she wants and I insist on going from start to finish. This series, however, I read out of order.  And it didn't matter.  I loved them all.

Front Page Fatality is the first of the Headlines in High Heels series.  Nichelle is the crime and court reporter for the Richmond Telegraph and she loves designer shoes. She also loves beating her main rival, the reporter at Channel 10, to the big stories.  This one begins with a boat accident.  It happens while she's out having dinner with a friend so she's late to the scene and her rival is already on television with the story.  This story, however, goes a lot deeper than just a boating accident and as Nichelle digs deeper, someone is trying to stop her from finding out that rest-of-the-story that she is sure is there.  It doesn't help that her supportive boss has a heart attack and she's left dealing with a very non-supportive replacement that wants to give her job to his girlfriend.  Add a sexy mafioso that shows up in her living room and Nichelle is having an interesting week.

This series has all the fun a cozy mystery reader is looking for along with the atmosphere I like.  It also draws you into Nichelle's world in a way that lesser writers miss when trying to write this genre.  I read the 2nd, 3rd and 4th books in the series because I had gotten them from Netgalley.  As soon as I finished the fourth one I logged right onto Amazon and bought this one.  It enjoyed it that much.  I felt like this one may have had a few more f-bombs in it, which I hate, than the next 3 but I don't count them so I don't know for sure.  They aren't pervasive but I don't like them at all.  Anyway, this is a series that restores my hope for the contemporary American cozy.